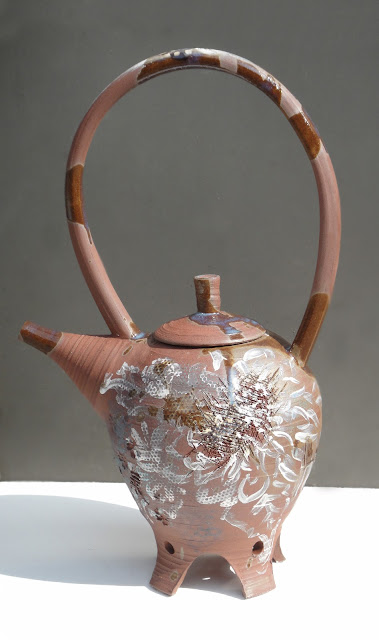 This is the first of my new terracotta range, with cross hatched areas to create rough textured areas, brush painted chrystanthemums and screen print in oxides and underglaze turquoise with glaze splashed over the top. I'm really happy with these, as finally I have teapots that aren't always warping in the kiln! I also really love the dramatic dark colour. I had thought that maybe the porcelain would crack or flake in places due to the different shrinkage rates, creating an interesting weathered effect, but it hasn't at all. Instead it has adhered admirably to the terracotta and taken on the characteristic translucency of porcelain, giving the brush painting even more depth and a slightly ethereal almost not there appearance. So, even though it didn't do what I thought, it still gained an aged appearance like I wanted! This also opens the door to the possibility of putting other imagery underneath the slip painting for extra imagery layering. I also really love the interaction of the glaze as well, adding extra texture and a more ergonomic grip to the handle, as well as a splash of colour. I think I prefer glazing this way, I can be more creative with it and not worry about masses of molten glaze running off the pot and potentially ruining the base. As for the feet, of the two teapots I've got out of the kiln, the feet look best with one at the side, not two as the shape flows better, but also with the cut outs as this makes them look less heavy. I have been trying to give the teapots a light and "lifted" appearance (or rather I have been avoiding slouching and bad posture?) so that people will want to lift them and use them as they look like they are reaching for the air already. It just feels right somehow. 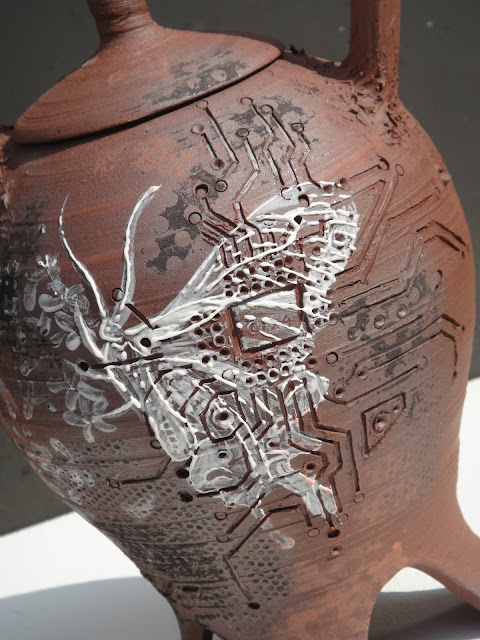 Here is the teapot for the Wedgwood Museum. The slip trailing has also managed to glue itself to the terracotta really well, and makes a lovely contrast with the opaque dark clay. The translucency really lends itself to the wings, and I love the circuit board pattern underneath. I'm trying to express the journey tea has taken from ancient China and Japan to the modern day in England, often sat in a mug in front of the computer screen. So, we have a Japanese inspired brush painting of a Japanese butterfly (kuro ageha for anyone interested) contrasted with the circuitry and modern print of today's Western world. I hope whoever buys this will treasure it. 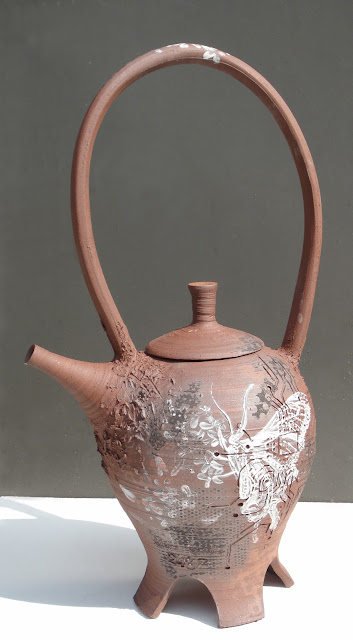