For those with no patience, did you know you can press flowers in the microwave? My A level textiles teacher told me about it once, so I tried it at home with my flower press. Unfortunately, I forgot that my flower press had metal screws in it (I was probably daydreaming again) so it wasn't until I could smell a suspicious burning smell that I realised I'd set the microwave on fire. Well, the flower press at any rate. Oooops! I hadn't tried it since then until tonight. I did a bit of research this time and found a couple of websites who talked about it: http://www.joannasheen.com/tuition-advice/how-to-press-flowers/ and http://preservedgardens.com/how-to-press.htm. Since the two sites seemed to corroborate pretty well, I sandwiched my flowers (the remains of the bunch I'd been drawing from - they were finally starting to wilt and some had become seedheads) between at least two layers of folded over scrap A4 paper, placed them in my 700 watt microwave and piled two pyrex dishes and a pyrex jug on top to flatten and weight it all down. The websites recommended short bursts, so I was microwaving for about a minute and then taking the paper out to dry off. It got really wet in there! The first few flowers I was giving maybe up to 4 bursts in the microwave, but they were getting a kind of tan halo around the middle (scorch marks?!), so I tried microwaving for less time with more drying out time in between. In the end, about a minute and a half seemed the best time, any less and the petals were still juicy. Lots of blossoms, a weirdly smelling kitchen (somewhere between something floral and a deep fat fryer) and burnt fingers later, here are the results: 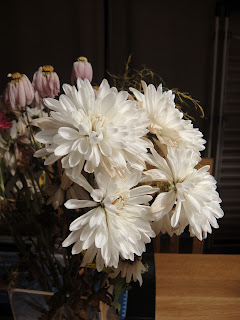 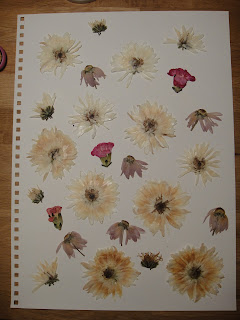 Left: The remains of the flowers

Right: After pressing. Mostly the ones near the top of the picture are the last ones I did 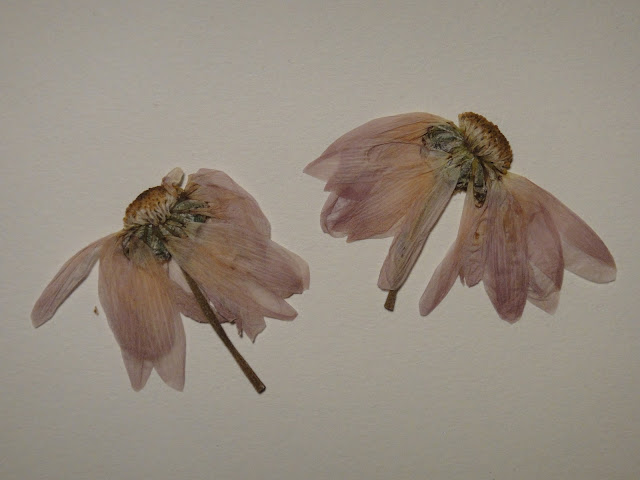 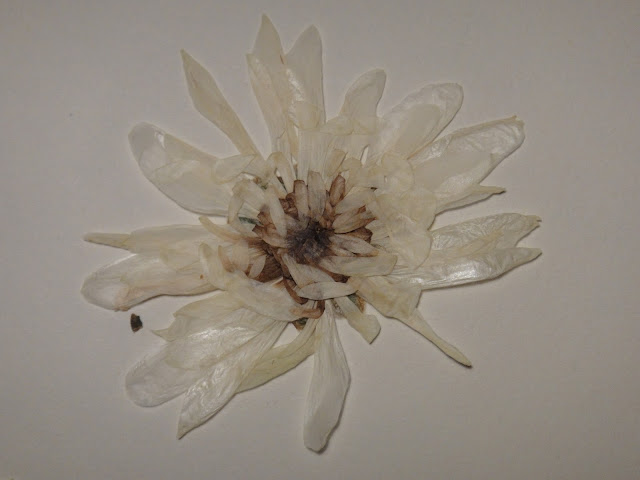 So I have now recorded the life of these flowers from the start until the end through drawings, photos, and finally pressing them as they were going through the various stages of dying. Strangely, they both attracted and repulsed me at this stage, the droop of the petals was quite graceful but the dead brown centres of the chrysanthemums looked really disgusting to me at first. According to sabi, things gain beauty through age, and certainly the life cycle of the flowers is very interesting to watch and record, but the actual dead petals don't hold much for me. However, I do quite like the slow disappearance and transient quality of flowers, and it is much more interesting visually to draw flowers at all the stages of development rather than identical perfect blooms. I think people get fed up of an idealised aesthetic in the end, it's not realistic, and it gets boring and depressing after a while. Reality is made up of the good, the bad, the beautiful and the ugly, and if you can find the beauty in an ugly world, it is a much greater treasure for coming from a world you can relate   to, for its authenticity, and for the hope it represents for everything else. It's also a beauty you can't take for granted. I can't really explain it very well though.