Since discovering hanakotoba (Japanese language of flowers), I've been curious about what the significance of wisteria is in Japan. It was in bloom growing wild in the mountains when I visited Nara and Kyoto, and was the token flower of a shinto shrine I visited. I'd never seen it growing wild before, and it took my breath away! Every now and then you'd see a tree draped in purple among all the green in the steep sided forests where the vine had climbed through all the branches. Unfortunately we drove past all this too quickly for me to manage to get a decent photo, but here are some shots I got from the shrine!. 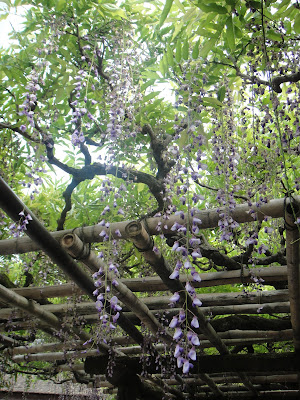 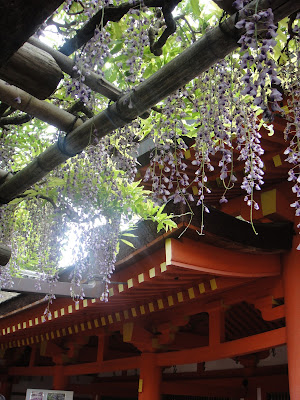 Anyway, I just found this website talking about the symbolism of wisteria:
http://www.whats-your-sign.com/wisteria-meaning.html

It's really interesting. The site talks about the Japanese story of a wisteria maiden, a lady holding a branch of wisteria in a painting who falls in love with a man. She becomes so besotted that she steps out of the painting to capture his heart, but her attempts are futile and her love remains unrequited. Rejected, she steps back into the lonely world of the painting with her wisteria. The symbolism here not only talks about lost love, but the endurance of the heart in the face of rejection as well, as the weeping blossoms bloom from an incredibly durable vine. It strikes a chord with me, as I strongly believe that no matter how impossible or hard things are, there is always hope while you believe in it. This is true of art, tradition and culture too. However irrelevant or lost they may seem to have become, if one person finds something meaningful in them, then they will endure. This can clearly be seen in the case of Egyptian hieroglyphs, a written language lost and indecipherable until the finding of the Rosetta stone thousands of years later.

There are other meanings to wisteria too:


"Shin Buddhism also views the wisteria meaning is as a symbol of prayer, or thoughtful reverence for the same reason. The branches and blossoms seem to lower their head in gentle supplication. These vine gestures naturally bring to mind our need for peace, quiet, and time to honor the divine essence (of our own understanding)."

This fits in with the meditative qualities of tea drinking and the tea ceremony - exactly the ideas I want to convey with my pieces.

"Flora records indicate wisteria has been known to live up to 100 years or more, and so here it picks up its symbolism of longevity and immortality. European families mark the ages of generations passing with the growth of this vine, and so it makes sense the vine embodies an essence of immortality (as fathers and grandfathers tell their sons of stolen kisses beneath the same wisteria that grew during the day of their great grandfathers)."

This suits the idea of tradition, a thing that endures and stays the same through the ages. I also like things that speak of the past yet continue to maintain a thing of the present. That is the wonderful thing about Japan, the modern and the ancient exist and carry on side by side, alive and full of vitality. Most old things in England are in decline, being replaced or have become museums.

"Most interestingly, is the wisteria pattern of growth. Like most vines (and ivys), wisteria expansive tendrils grow out in a spiraling motion. The meaning of spirals deal with expansion of consciousness. Spirals also point to our awareness as the inner-most center. This awareness spans outward in a spiraling motion to indicate our influence on the outside world. In this manner, vines and ivys also remind us of our interconnectedness with everything on every level."

Meditation and reflection. Also, spirals represent creative energy, and tend to creep into my work when left to myself, so I think they are a reflection of me and my thought processes on quite a deep level. I like the flow and movement of them, and the energy that suggests.

Which leads me on to: water and flow.

Water and flowing movement are a huge part of working with clay, yet I have barely scratched the surface when exploring them. They are also a major part of the general backdrop of Japan - Japan is a collection of islands that relies on the sea after all. The general feeling I got from Japanese ceramics was that it always worked with the flow and nature of clay to achieve it's shape and beauty. It never fought it in an obsessive fight for perfection and a ridiculous level of extravagance, desperate to push the "boundaries" like so much Western ceramics seems to, and like I felt I do looking at all that amazing work. I felt stupid and pretentious.

Continuing what I started in Japan, I am now starting to experiment much more with really thick liquid clay, finger marks and textures, inspired by the movement of water, wind, and clay on the wheel. I'm creating bowls in moulds by gunking the slip in, spreading it around, dragging my fingers through, and pulling up spikes or throwing droplets into the surface. I'm also throwing bowls, teapots and flasks and allowing the motion of the wheel to pull thick slip off my fingers onto the surface of the clay in spirals and amazing textures. It's actually amazingly releasing and relaxing working in this way, the act of making feels more meditative and I feel more creative. It has a similar feel to hakeme, except that uses a rice straw brush instead, but the contemplation, and then the simple sweeping strokes are just the same. I love the effects - they are much bolder and clearer than my previous techniques achieved. Photos soon!
Posted by Emily Rose at 02:25