I woke up at about 10 P.M. and found no sign of Tomoko. I think she must have already gone to bed. It’s been a strange day, but not a bad one. The last few days have been pretty hectic really.

I was still busy at uni on the 30th of March with the last of my Japanese exams (the written one) and by that time I was pretty tired. This left me just over a week to sort out my flat, sleep off my deadlines, pack and get ready to go to Japan for two months. My to do list was pretty extensive. I’d already redirected the post and got a working holiday visa (I had to visit the Japanese embassy with an application and various documents, and they then took my passport off to add the visa), undertaken a course in Japanese language, looked at phone rentals, researched the best flight options (Tokyo Narita airport taxes are insanely expensive, so I flew via Frankfurt), and a number of other things. Now I had to clean and tidy and shut up the flat, do the garden, pack, check all my electronics and digital storage, check I’d got everything I needed or go and buy it (my canvas shoes were pretty well worn out and had to be replaced), sort out lines of communication I could use, including for data transfer, and check what medication was allowed (I have hayfever, and some over the counter English medicines are illegal In Japan, with nasty consequences) etc, etc. It’s all kind of blurred in my head now.


I was nervous coming to an almost complete strangers house in a country where I’m only just learning the language, but I thought I’d be more so. Monday night my parents took me to the airport hotel in Birmingham, and I spent a lot of time after they’d gone to bed doing a last minute copy of a large amount of my Japanese notes with my camera. We got up at 6 A.M., had breakfast and then headed over to the terminal so I could check in. I’d cut my baggage down pretty ruthlessly so I’d be within the weight limits, and I wasn’t carrying any books that weren’t Japanese phrasebooks or sketchbooks, only roughly enough clothes to last a week, a few pairs of shoes and my laptop. Not to mention various toiletries, as last time I came to Japan, one of the people I was with accidentally bought floor wipes thinking they were face wipes. Not a mistake I want to make! Check in went fine, and soon I was at the security gate saying goodbye. The flight to Frankfurt was short and I slept for most of it. There was a small amount of turbulence at the end, and then the plane taxi-ing to the terminal felt longer than the flight. Once off that plane, I had to catch the next flight to Nagoya after some lunch. To my surprise, the airhostesses spoke English, so it was a pretty easy flight, but next to impossible to sleep. The flight path took us north and through Russian airspace, over part of Siberia and over North Mongolia, China, then Korea. 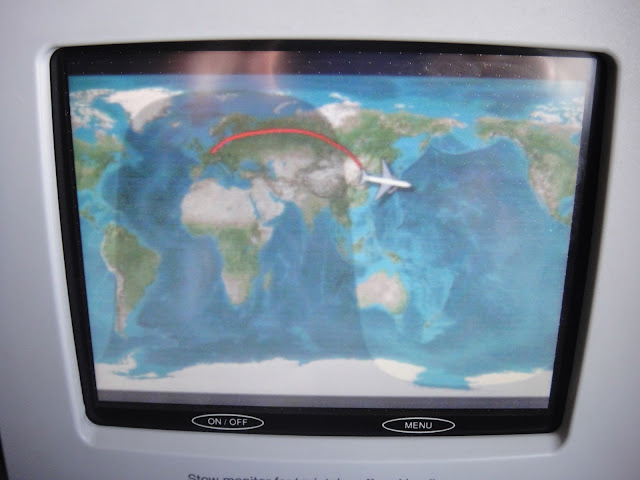 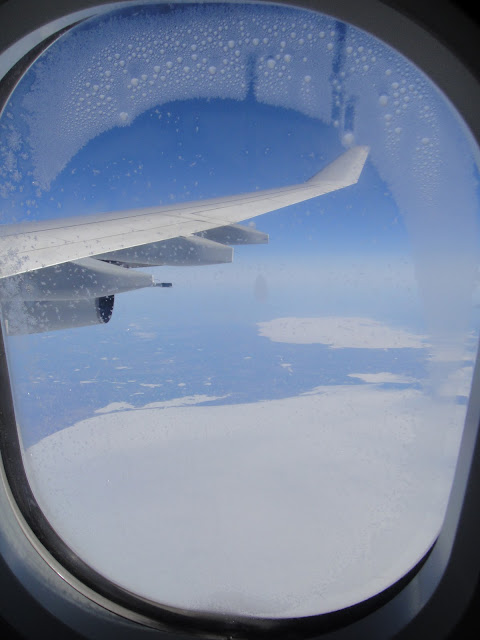 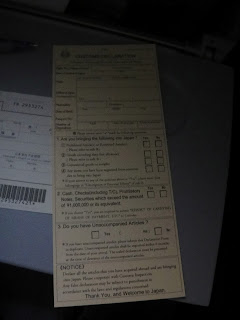 During the flight I had to fill out two immigration forms to hand in at customs, asking the purpose of my visit and whether I was carrying restricted or illegal items. I’d done this last time I flew to Japan so was expecting it, but I did wonder what category the hayfever tablets fell into all the same. In the end I left that section blank.

Eventually we came in to land, and for a minute I thought we would land in the water. All I could see was ocean underneath us until right at the last minute. Then we were down, and I saw a sign saying “CHUBU CENTRAIR” and then one saying “STOP” painted on the ground. So much for the language barrier, I swear everywhere speaks more English than their mother tongue….

Going through customs went ok in the end. Once I found the right counter, they decided piriton would be permissible, and I managed to hold a conversation with the customs people in Japanese. Getting out the other side, I rearranged my luggage and put the passport away while keeping an eye out for Tomoko. I couldn’t properly remember what she looked like having met her only once, I had an impression in my head of a small older lady who wore glasses. The lady who caught my eye was not wearing glasses, and looked taller and younger than I remembered.


She came over and then we went out to her car, which was bigger and less boxy than most Japanese cars, and she drove me a short distance back to her house in Tokoname. The area we drove through reminded me very much of the back streets in Tokyo, but with fewer buildings. There was the odd concrete block, and then streets of tiny dark wooden houses with bamboo screens over the windows and greenery by the door. Tomoko asked how long I’d been learning Japanese and told me it had been really sunny the day before despite today’s rain, and that because of a long cold winter, the sakura had only just come out so I’d truly be able to see the Japanese spring.


Then we got to her house. Tokoname has a pottery path, a kind of trail for visitors to take with a lot of galleries and sights to do with the ceramics industry on it, lined with old houses and walls made of old pots, and she lives next to it. It’s old, and looked very small and cute. She told me it’s rented, and there are two parts or wings to it. The toilet is separate again, in a small bit by itself, and had a western style seat over a hole in the floor – no flush. The room she has given me to use is traditional Japanese in the opposite wing to where she sleeps, and seems to be used for guests and storage (bags of different clay are stacked by the front door), with a separate front door. The walls are made of some kind of chipboard with gold sparkly flecks in it that catch the light, it is eight tatami mats big and has a futon, low chest of drawers and dressing table in it, plus a floor cushion and a couple of her sculptures. Simple but quite cosy. Her studio is semi outdoors, it’s kind of a semi courtyard and is a covered area between the toilet, two front doors and her garden. There were shelves of half made pots, her kiln and other kit. Her Mum and herself live in the other wing, where the living area, shop, kitchen and bathroom are. The bathroom is tiny and is the usual showerhead and stool next to the deep bath, with a separate basin area through a curtain off the kitchen. The lounge has a kotatsu in. I’d never seen one before! They are low tables with thick blankets under the table top hanging down to the floor, and they have a heater underneath for keeping your legs warm.

Tomoko introduced me to her Mum and we chatted for a bit (she asked where I lived, and told me that English potters Penny Simpson and her friend Ruth had been visiting the previous week as well), before Tomoko said she had to take her Mum to the hospital for an appointment, but would be back at about 2 P.M. and we’d have lunch. Since then I unpacked my bag, had a shower and slept until now. We’ll see what happens tomorrow. Tomoko won’t be working, but I’m going to try and get up at 8 A.M. as I don’t know what her usual routine is.


P.S. Thankfully, I have discovered that my phone really can call and receive in Japan. No internet yet though.