I have just discovered that the big Japanese culture event I'm planning to go to in February is going to have Japanese ceramics there too! I can't wait!

The event is called Hyper Japan, and I found its website online a few days ago. I thought it was pretty unusual, as I've only ever seen museum exhibitions of traditional stuff or comic/anime expos being organised before, nothing really about the rest of the Japanese culture. However, here they seem to have everything all mixed up together! Food, sake, kimono, cosplay, street fashion, books, films, manga, music, traditional crafts......

So maybe the overall effect is something like this: 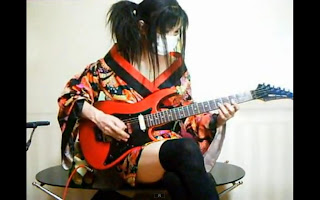 However, I could never hope to do such an extravaganza of sensory overload justice with a few mere photographs. J-culture has to be seen to be believed.

I've been on some of the exhibitors websites now, and among other things, they have some gorgeous kanzaki, or hair ornaments. I've been thinking for a little while it might be nice to have a go at making a hair comb or pin the the crochet flowers I'm making. Crochet corsages are pretty popular here at the moment, and giving them an oriental twist might spice them up a bit! >: 3

Matching teapot and hair accessory anyone? For those interested, this is Hyper Japan's website: http://hyperjapan.co.uk/ , and it's on for three days, the 24th, 25th and 26th February at Earl's Court in London