Finally it is done! Here are the final photographs before assessment (after assessment it is going to the Public and the outside will be painted grey to match the other tables and plinths).

In the end, to simulate the traditional Japanese clay/plaster wall finish used on the tea house in the British museum, I ended up using textured masonry paint! Dulux colours were just too bright and colourful, and wallpaper, although it would have looked fantastic, would have been impossible to touch up if it got damaged in transit, and without knowing how good a finish I could achieve having never used it before I decided it wasn't practical. I also considered fabric stretched over the boards and painted, but the cost of the fabric on top of the paint would have been prohibitive (and I couldn't get a Dulux colour I liked as I said). Here it is waiting on the paint to dry. 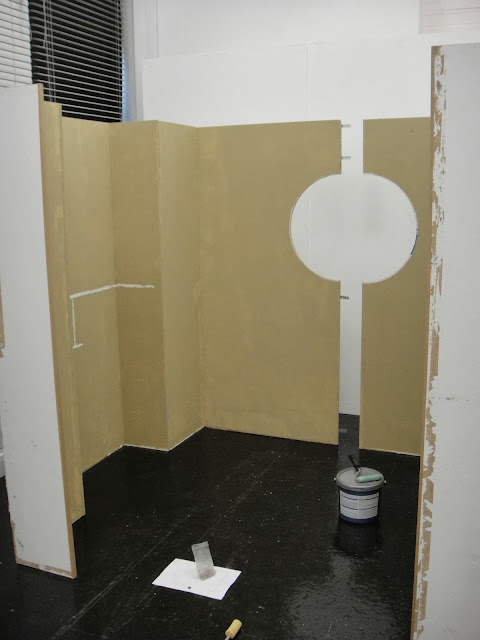 So while that was drying, I glued the washi paper onto the frame that would form the "window". As it turns out, I wished later that I'd glued the paper on after gluing on the bamboo frame, because of course where the glue spreads it weakens the paper and leaves marks where it runs, but overall this operation went pretty smoothly, so this is just a note for efficiency next time! The paper was unbelievably see through, and I was glad of the accidental ridge inside the frame where the lighting had to sit, because it prevented tiny pin pricks of light being obvious through it. When I finally got the "window" up and lit up, it looked like there was this halo of light inside! So as for looking like natural daylight, that failed, especially since the cool colour of the light from the LEDs shouted against the warm lights in the installation room and didn't look like sunlight at all! Instead, it looked like this super modern contemporary light fitting, and gave this kind of edgy atmosphere that reminded me of Tokyo, the ultimate blend of history, tradition and the cutting edge, which I really liked. After all, my work is not Japanese, although it is inspired by Japanese ceramics, and it is more fitting that work that is a new interpretation should be shown in a setting which is a new interpretation as well. Unfortunately though, true to the reviews on the website I bought them from, the LED lights aren't the best at staying stuck down, and may need gluing on as well later... 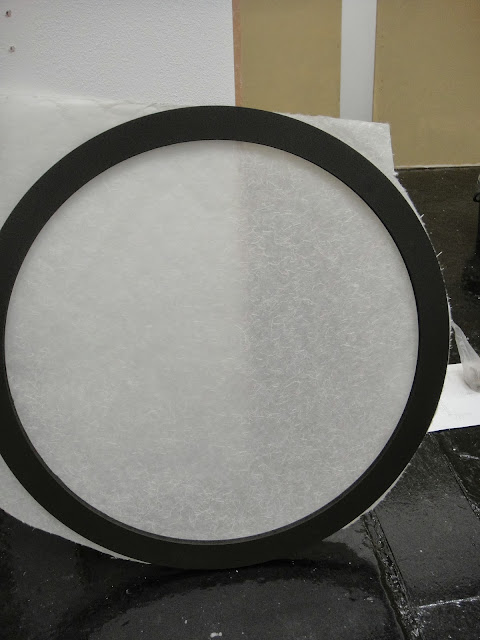 The finished tea room! I didn't have time to do all of the ties down the bamboo for this shot, but you get the rough idea :)

It's come out really well so far (especially since I'm using recycled boards). It has the scent of a Japanese room unlike my last attempt in the gallery, thanks to the real tatami mats, and overall it's much more authentic this time! Although it all still feels very clean and new compared to traditional Japan; there's no patina yet. 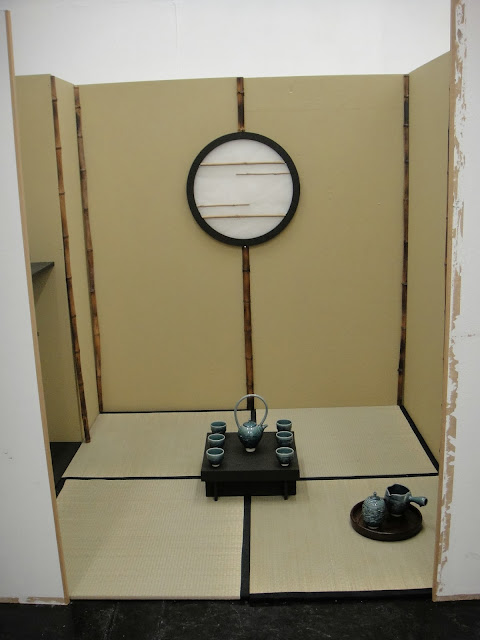 It has a great cosy feel to it, my main downside is that for it to look good, I can't display as much inside as I did with the last exhibition. To look Zen, the shelving display needs to have only a few pieces on it so they can really stand out as individuals, and to give the wabi sabi lonely feel. I think in the shot below, I had too much on there. Maybe on the bottom shelf I just want one Naruto bowl, and one on the top shelf, and then a teapot and tea caddy or something on the middle shelf. Strangely, before the bamboo went up, I discovered (to my horror!) that the yellow hue of the paint brought out a yellowy hue in the green glaze of the pieces on the shelf, washed them out and made them look a bit vomited on. Magically, the minute the bamboo was up it looked normal again (the effects colours have on one another are amazing, the reddish hues must have balanced everything out) but next time I will definitely have to be more careful when selecting wall colours! 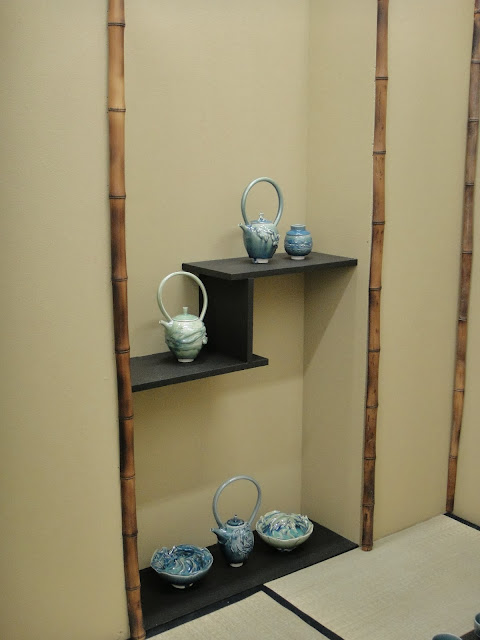 Now the display is all packed up and waiting to travel to be set up at the MA show! Since I can't be there to set it up (I'll be in Turkey for a symposium) I'm having slight kittens about whether it will be ok..... fingers crossed my instructions are legible!