Sticky back Christmas lights.... sort of

So this morning I have ended up looking at potential light sources for my display. I'm starting to get a bit itchy about the deadlines coming up for my MA and everything else I'm supposed to get done before Christmas and moving house, so I want to see if I can get the last few materials I need ordered so I don't have to worry about supply and waiting on delivery at the last minute. I'm hoping to have a blitzkrieg in the studio on my pieces next week as well, as they have been a bit neglected while I was trying to sort house/studio/symposium article/display issues. So, this weekend I'm aiming to get at minimum some kind of framework for the new portfolio going, and order the bits for the circular paper window light.

And with that, we come back to sticky back Christmas lights... sort of. What these actually are is a nifty little gadget I came across when I was setting up my solo exhibition called LED strip lights or LED tape. Here's what it looks like:

What it is is lots of LEDS attached to a flat backing with a ready attached double sided adhesive strip that can be cut to any required length (or rather, at any indicated interval between the lights, which seems to vary between being between any two LEDs and between every interval of three LEDs). So it's basically a cut, stick, plug and play kind of deal. 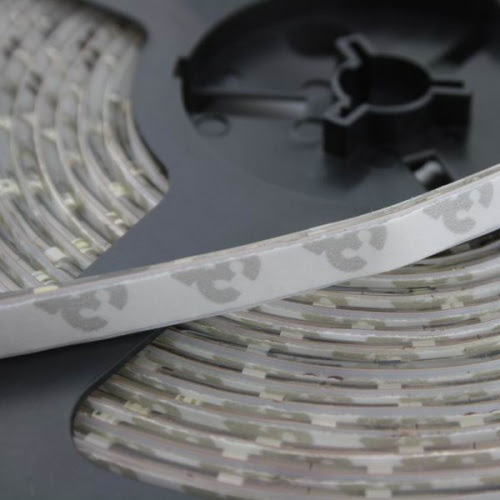 The nice thing about these LEDs is that they are aimed at a slightly more high spec market than your bog standard Christmas lights, so they are sold with quite technical specifications, such as the colour rating of the light, the strength of the light and a whole host of other bits of information. This means that I can get a white light that will simulate sunlight (cool white), or look artificial (warm white) and I know how bright it will be. The only, and critical, issue is finding out the beam angle of the light. These LEDs are useless to me if they shoot laser beam like shafts of light straight up and create mini spotlights all over the place, I need a wide, diffused beam to create a general glow (even though there will be paper in front to help diffuse the light, it can't do it entirely on it's own).

A bit of internet digging later, and here is what I have found out:

The Comparison Between SMD 3528 and SMD 5050 LED Strip Lights

The LED strip I'm looking at is rated as being 900 lumen for brightness.
(http://www.ledhut.co.uk/led-strip-lights/5-meter-smd-led-strip-light-60-led-s-per-meter-warm-white-best-price-on-the-internet-472.html)

It would seem that on average, this kind of tape casts light out over a 120 degree angle on average. This is fantastic as it's quite a wide beam and should therefore be quite diffuse and spread the light over a large area as long as I aim it right. They are also low power so could potentially be run off of a battery pack, and bright.
Just for comparison, I looked up the strength of sunlight in lux/lumens (same unit used to measure the brightness of LEDs, since wattage doesn't quite cut it for them). Here's what wiki reckons:

and then a 100 watt daylight bulb, which stands at 910 lumen.
So, the LED strip I'm looking at is equivalent to a pretty overcast day and a strong daylight bulb. Since I'm trying to imitate daylight through a paper screen, this is definitely worth a try! The only drawback is I'll have to wire it.